COVID-19 in Slovakia: a first ESIF instrument to help SMEs hit by the crisis

In as little as a month, Slovak Investment Holding (SIH) has launched the SIH Anti-Corona Guarantee, a new financial instrument to help SMEs overcome the financial difficulties caused by the COVID-19 crisis and help preserve jobs. It is one of the first products introduced by National Promotional Banks and Institutions in the EU after the outbreak of COVID-19, which employs European Structural and Investment Funds. Ivan Lesay, CEO of SIH and a member of the EIB Board of Directors explains how this instrument was conceived and what the main benefits are for those who need it most. 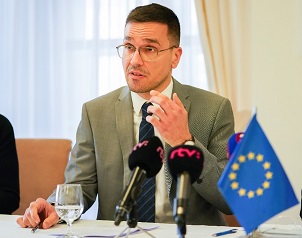 Ivan Lesay: "The SIH Anti-Corona Guarantee is the most favourable product SIH has created so far and we are certain that the current environment requires such extraordinary measures.”
Credit: TASR (The News Agency of the Slovak Republic)

Can you tell us a bit about yourself and about your relationship with SIH and the EIB?

I have been the CEO and Chairman of the Board of the Slovak Investment Holding since January 2017 and a member of the EIB Board of Directors since 2016. Before holding those positions, I used to work as an advisor to the Deputy Prime Minister and Finance Minister of the Slovak Republic and as a State Secretary at the Ministry of Finance of the Slovak Republic. Whilst at the Ministry, I was closely involved in setting up the European Fund for Strategic Investments (EFSI), the central pillar of the Investment Plan for Europe as well as Slovak Investment Holdings. SIH and EFSI have many features in common. From the involvement of private financial institutions as a way to leverage private capital, through the use of financial instruments including equity, to a strong focus on energy efficiency and the environment, they work hand in hand.

How and when did you decide to design an instrument to fight COVID-19 in Slovakia?

At SIH, we decided to impose a teleworking mode as early as the beginning of March. Around the same time, we were already having some first internal discussions about the economic effects of the pending lockdown measures on business and how SIH could play a role in addressing them. By the second week of March 2020, our team was in full speed preparing this instrument, including preparing the de minimis scheme to address State aid issues. On 23 March, we launched formal market consultations with all the banks in Slovakia and on 30 March, we launched the call for expressions of interest. As of now, we have signed contracts with three banks. Given the exceptional character of this worldwide health crisis and the need to respond very quickly, SIH had prepared this financial instrument in the shortest period of time ever.

Can you please briefly describe the guarantee and interest rate subsidy product? Why do you think this guarantee fund is a good tool to help businesses in such a difficult economic situation?

The SIH Anti-Corona Guarantee consists of two elements. The first one is a portfolio guarantee, with an 80% coverage on individual loans and a 50% portfolio coverage provided to financial institutions to support provision of loans to SMEs. The second one is the interest rate subsidy that goes up to 4% p.a. on these loans and which is conditioned on SMEs’ capacity to retain jobs during the first year despite the crisis. With this financial instrument in place, SMEs can benefit from low- to zero- interest loans with three- to four-year maturities, one-year grace period on principal and interest payments and no collateral requirements. This is the most favourable product SIH has created so far and we are certain that the current environment requires such extraordinary measures.

How was the new financial instrument implemented?

From the start of internal discussions at SIH, it was clear that being able to respond quickly would probably be the most important success factor. Luckily, we were not the only ones with this mindset. The speed demonstrated by other actors, such as the European Commission, the European Investment Group as well as government institutions in Slovakia, was unprecedented. For example, the de minimis scheme that we prepared for this instrument was approved in a record time by the Anti-Monopoly Office of the Slovak Republic (the State Aid Authority in Slovakia) in a little over a week. Probably the most crucial consideration in terms of time efficiency was the procedure for retaining financial institutions for this instrument through an open call for expression of interest rather than through a public procurement procedure. With this procedure in place, we were able to sign the guarantee agreement with the first financial institution in less than three weeks after we had launched the call. Had we used a public procurement procedure, getting to the signing of the first financing agreement would have taken six to nine months in an optimistic scenario. We also benefited from participating in the current fi-compass Knowledge Hub on selection of financial intermediaries which has considered when an open call for expression of interest is a suitable option for implementing financial instruments.

Which innovative features enabled by the simplified regulatory framework for financial instruments does the SIH Anti-Corona Guarantee use and what are/will be the main benefits you think for final recipients?

As we started preparing this instrument in the first half of March, we worked according to the pre-COVID-19 legal framework. The SIH Anti-Corona Guarantee could therefore not benefit from recent legislative amendments. However, guarantee agreements with financial institutions include a provision for changes, as a result of which, it is possible that some of those legal amendments be incorporated at a later stage if necessary to meet the needs of final recipients.

This new financial instrument targets SMEs in this extremely challenging period. First, what type of SME can benefit and what specific advantages does it offer them?

Other than the legal limitations associated with the European Structural and Investment Funds, de minimis rules and other applicable legislation, we introduced no further limitations as regards the group of eligible recipients. In other words, any small and medium sized enterprise active in Slovakia can apply for funding. The only limiting factor concerns the interest rate subsidy, which can be provided only to those SMEs, which avoid laying off their employees. Considering the size of the interest rate subsidy (4% p.a.), I believe that this is a very fair trade-off.

What will happen next?

The original allocation for the SIH Anti-Corona Guarantee was EUR 38 million, which is a small amount for the Slovak market. Over the last days, we had secured an additional EUR 57 million from the Ministry of Economy and if banks grant loans quickly, further resources could be made available. We are also in discussion with the Ministry of Finance and other government authorities as regards another potential financial instrument and additional funding sources, which should also target mid-caps and large-caps in addition to SMEs. With this second instrument, we will likely take advantage of the new State aid Temporary Framework, revisions to the Common Provisions Regulation and other innovative features introduced by the legislator.

Finally, how do you view the EIB role in fighting this unique health crisis?

I am happy to say that the European Investment Bank Group rose up to the occasion and responded with the necessary urgency. The additional funding lines as well as the new Pan-European Guarantee Fund are important tools to fight the immediate crisis. I would equally like to praise the EIB’s financial instruments advisory colleagues, who are working swiftly to help Member States deliver appropriate financial instruments to the market.

Listen to a dedicated podcast episode on the SIH Anti-Corona Guarantee here: